What’s in a Work Zone

A work zone is defined by the U.S. Department of Transportation’s Federal Highway Administration as, “That part of the highway being used or occupied for the conduct of highway work, within which workers, vehicles, equipment, materials, supplies, excavations or other obstructions are present.”

MDOT understands that traveling through highway work zones can be frustrating, and dangerous because work zones present many drivers with unfamiliar driving conditions. Below are some common situations motorists may encounter as a result of a work zone.

One of the best ways to stay safe when approaching and traveling through a work zone is to pay attention to advance warning signs. Motorists should obey these signs until they have passed the ones that state they have left the work zone. Some of the most common signs motorists will see in a Mississippi work zone, and their meanings, are listed below.

Road work is just ahead. Be prepared for unfamiliar driving conditions.

Lane closure ahead, requiring driver to merge to the adjacent lane.

Lane is about to end, requiring driver to merge to the adjacent lane. The “bent” lane indicates which lane is ending.

Flagger ahead. Be prepared to stop and/or follow flagger’s instructions.

Driver will need to take an alternate route soon.

Driver has reached the end of the work zone. Resume normal, safe driving.

While the nature of work MDOT does on Mississippi highways varies from project to project, there are standard ways in which work zones are set up. The graphics below provide an illustration of the most common types of work zones.
*Please note, motorists may encounter other work zone setups. However, these are the most common types seen on Mississippi highways. 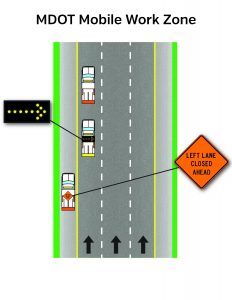 The first two vehicles will follow the third vehicle and give motorists ample time to merge into adjacent lanes prior to the vehicle performing the work. Motorists should begin merging when they see the first vehicle parked on the shoulder. 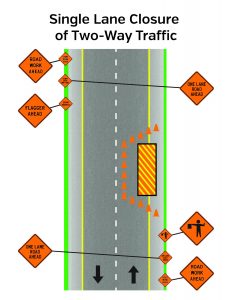 This work zone is used for the closure of one lane of a two-lane road. This work zone can be used for many different types of work including the resurfacing of a travel lane or road shoulder repair work. When approaching this type of work zone, drivers coming from either direction will see:

The work zone will be clearly defined and separated from traffic with orange barrels or cones. Once drivers reach the work zone, they should follow the direction given to them by the flagger. Remember, the flagger knows what is going on inside the work zone and is there to protect you and the MDOT crews working on the road. 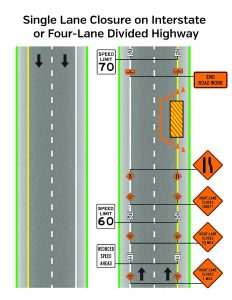 This work zone setup is used for the closure of a single lane on an interstate or four-lane divided highway. This work zone can be used for many different types of work, including the resurfacing of a travel lane or road shoulder repair work. When approaching this work zone, drivers on the side of the road in which work is being performed will see:

Once drivers move past the work zone, they will see an End Road Work sign, indicating they can resume normal, safe driving.

The three work zone types illustrated above are the most common drivers are likely to see on Mississippi’s highways. However, project details may require the setup of another type of work zone. Regardless of the work zone, motorists should obey the signs posted when approaching and traveling through work zones, use caution and avoid distractions. Work zones are set up in specific ways to keep the driver, and MDOT crews safe. 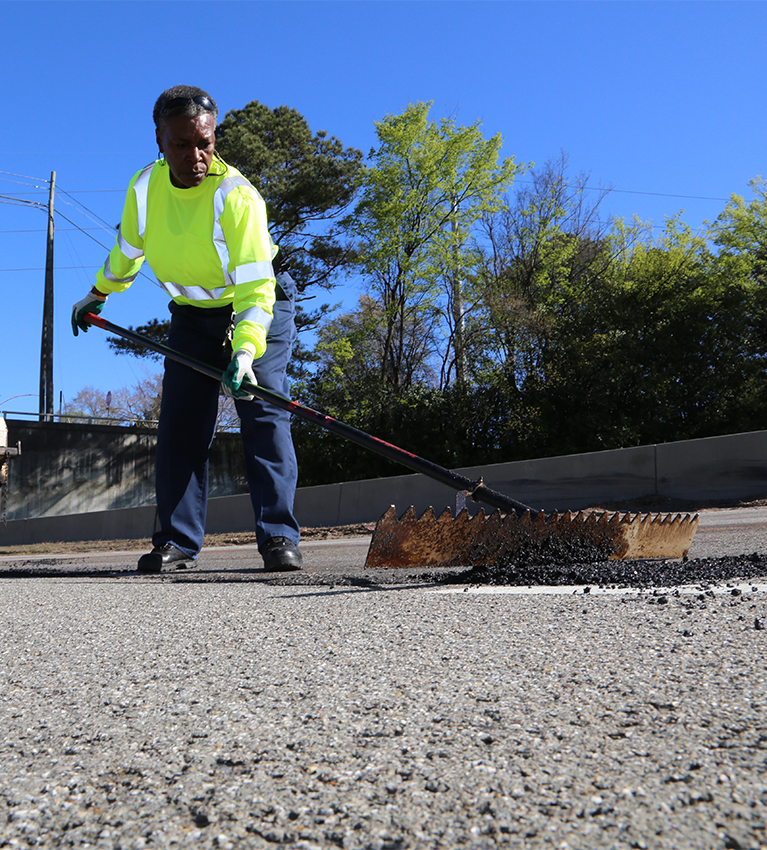 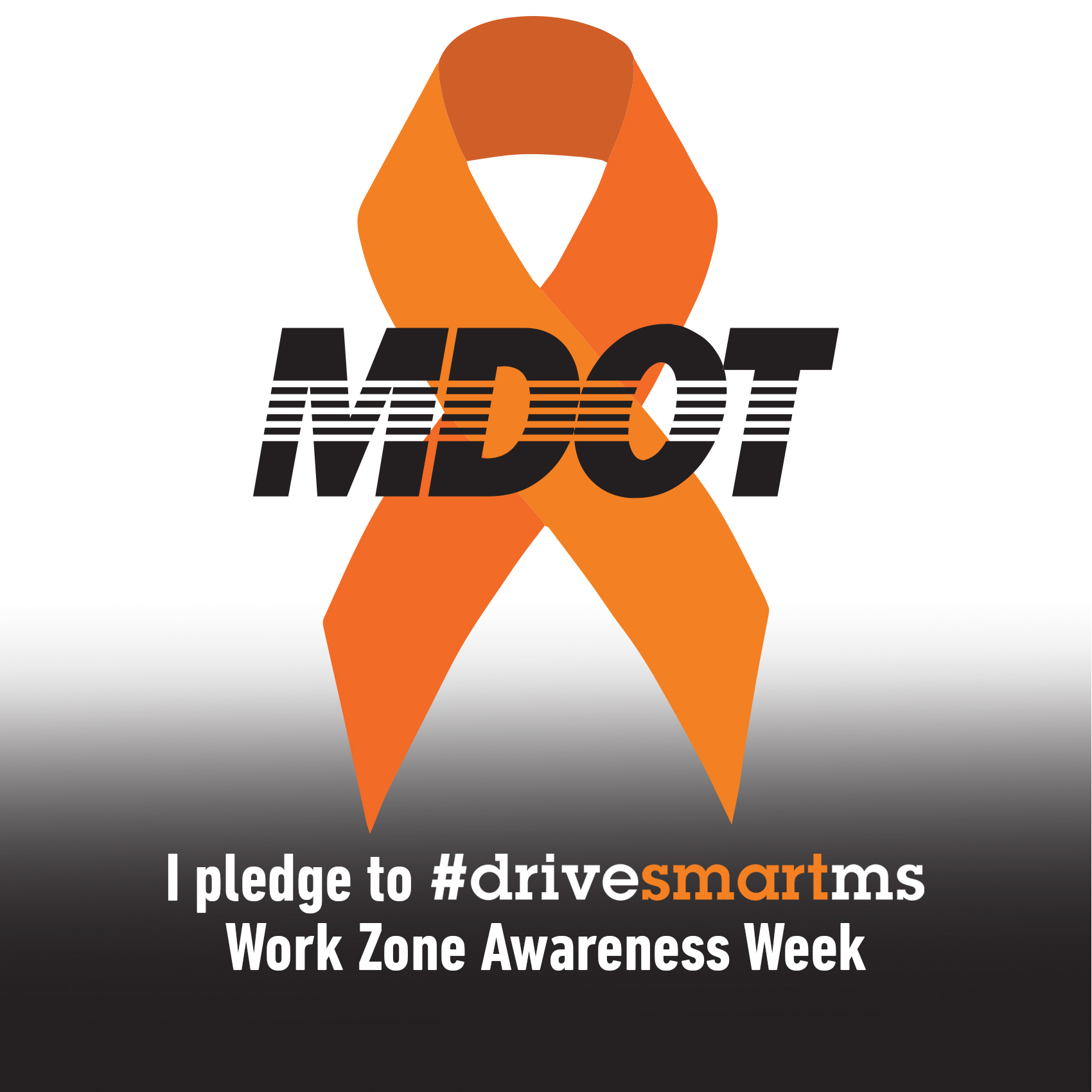 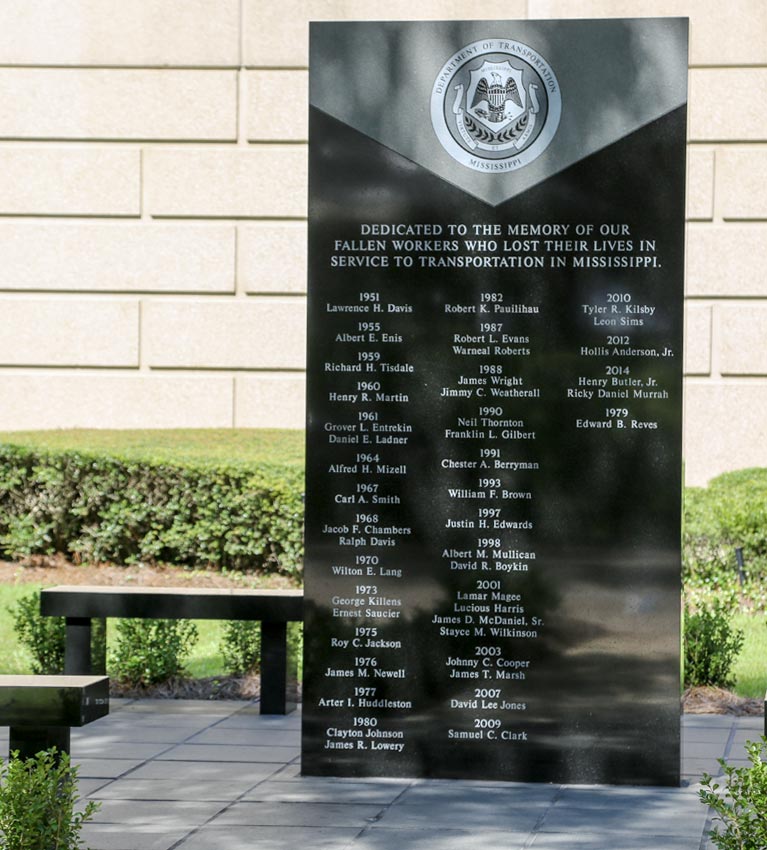